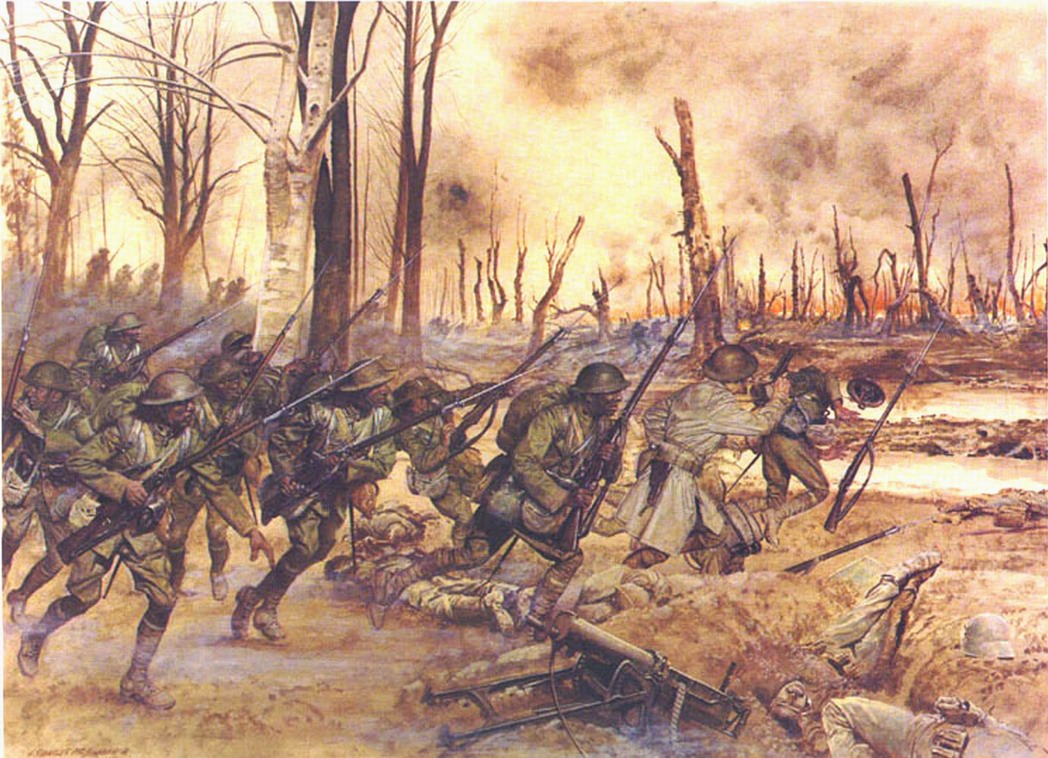 One of the consequences of Charles Darwin’s book, “On The Origins of Species,” it gave birth to a pseudoscience known as Social Darwinism which became one of the justifications for separation within society and the United States military.  With the onset of the Great War in Europe, it was a matter of time until the United States would find herself entangled in a war that would require force participation.  Perhaps one benefit of the Social Darwinist perspective is that when the draft came, African-Americans would be seen as inferior and not included.

Many African-American leaders, especially in New York and within the ranks of the 15thNew York National Guard, saw the Great War as an opportunity to once again prove that they were up for the challenge. Service in battle, and ironically from reading several diaries entries, the second amendment was seen as the road to equality and the end of segregation.  It is hard to call a man a coward or inferior when he has proven himself in combat.

Three all African-American regiments were formed; the first was the 371stwhich was organized on August 31, 1917, the second was the 369th(formally 15 New York National Guard), which was organized five days later, and finally the 372nd in January, 1918.   All three were assigned to the 69thInfantry Division.  Army leadership’s plans for the regiments were to use them as support units doing manual labor.  Quite frankly, they were never going to use a rifle or be provided any opportunity to prove their equality in France.

When the United States expeditionary force arrived in Europe the leadership of England and France saw all Americans as inferior troops.  Steps were taken to prevent superior American technology like the Browning machine guns from falling into German hands when the American troops broke in combat by giving them inferior older French machine guns. Not much hope was placed in the American forces when they went against battle-tested German troops.  To keep the Americans in line the entire expositional force was put under French command.  France had been fighting the Great War for four years now and to help with their moral and allow French units to be rotated off the front line, two of the African-American regiments, the 371stand 372nd, were augmented into the French Army.  The 369thwould remain part of the US Army.

The 369thInfantry Regiment was used as the United States Army initially intended – as a support unit.  But in war plans do not always go as they are put to paper.  By the end of the war the regiment was nicknamed the “Black Rattlers” by the French, and the Germans called them “Hell Fighters.” Now we know them as the Harlem Hell Fighters.  They spent 191days on the front line where they lost 1,500 men; more than any other American unit.  They have two Medal of Honor recipients, Pvt. Henry Johnson who was nicknamed the “Black Death” and Needham Roberts.  Many members of the 369thwere awarded the Distinguished Service Cross for valor.  On December 13, 1918, the French government awarded 170 men the Croix de Guerre, (France’s highest award), and a unit coin was presented to the entire regiment for valor in Combat.  The 369thInfantry Regiment was the first unit in the United States Army to be 100 percent African-American.

The 371stand the 372ndwere used as a true infantry regiment and conducted themselves with the highest of expectations. They would have one Medial of Honor recipient, Freddie Stowers, (do to lost paper work in WWI, the award was presented in 1991), 22 Distinguished Service Crosses, and 123 men received the French Croix de Guerre.

In the Battle for Hill 188, the 371stwould capture 47 machine guns, 8 minewerters, 3 77mm guns, an ammunition depot, several rail cars full of supplies, take massive prisoners, and my favorite, shoot down three German aircrafts with a bolt action rifles.  Of the 2,384 men that attacked Hill 188, 1,065 men would give up their lives, in the same period of time the total losses of all other American infantry units was 882.

Upon return to the United States the men of all three regiments were released form service and sent home.  The men had earned the respect of those who saw that action in France. At their last formation these men were encouraged to take off their service uniforms.  This was especially true for the men that would be going south. They had proved themselves to be the equal to any soldier or marine who served in France but  that made them threats to the status quo that was still enforced, especially in the segregated Southern states.  Sadly, for their courage in France and their pride in their uniforms that they earned the right to wear, there were several who were lynched still in their uniforms.

We respect our flag and national anthem because it wrapped the caskets of these men who fought in France during the Great War to prove they were equal in courage and character to any American and were among the best our nation had to offer.  We stand during the National Anthem to honor the 350,000 African-American soldiers who volunteered to fight and if required die in the Great War to prove their equality.

Thank you for your time! We encourage you to learn more about by following us on Facebook @hmihistory.