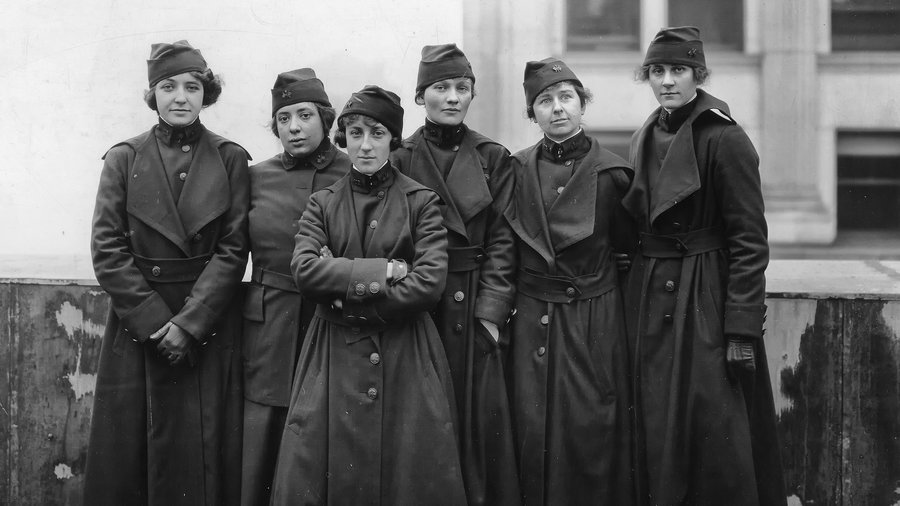 When someone who wants to help with our programs approaches me, I ask them to tell me something I do not know.  For me, life is nothing more than a learning process.   With that in mind, when someone trips me up with something I did not know, I get excited. Early in May that happened for the fist time in a long time when a poster arrived from the Golden Rondell in Racine promoting a premier of the documentary, “The Hello Girls.”  I thought I knew about all the roles women played in World War One, from the 310 enlisted women Marines to all the nurses but I never heard of the Hello Girls.

When the United States entered the war, General Pershing was in command of the Allied Expeditionary Force (AEF, what the US called our force in France). At this time telephone communication was a new technology for the US Army and the average time for a male switchboard operator to connect a call was 50 seconds, however a female civilian AT&T operator was doing it in 10 seconds. That 40 seconds in combat could very easily be the difference between success or failure of an operation when calling for artillery or other support. Because General Pershing was given a wide birth to develop and train the Army for combat in France, he called for women to enter the Army to fill those jobs; he hoped to get 100.

General Perishing’s office received over 7,600 applications from experienced AT&T operators who were excited to serve their county in the Great War.  The women began to show up for training, were given their oaths, uniforms, and training in basic military service and then deployed to France ahead of the men.  By the end of the war in 1918, 223 women would serve in the US Army Signal Corps Female Telephone Operators Unit, earning a pay of $30.00 per month, equal to their enlisted counterparts, but word was sent out that they would be treated as 2nd Lieutenants.

These women were headquartered in Paris but ran switchboard sub-stations twenty-four hours a day until the unit was disbanded in 1920.  They arrived before our boys, and they left after all our boys were back home in the United States.  These women also went to the front to teach the infantrymen to set up and operate field phones in the trenches.

Shortly after their arrival, the Germans attacked Paris in the middle of the night.  The women had to flee that berthing in their undergarments and take shelter in a fortified area. In the morning all the girls were safe and accounted for however, their berthing was destroyed and with it all their clothing and personnel affects. It was unclear if the artillery attack was to get them out or if it was just chance.

The most senior operator, Grace Baker, was placed in command of the unit; she was one of 16,000 Signal Corps officers serving in France. For her service, General Pershing presented her the Distinguished Service Medal.   Grace Baker was one of only 18 Signal Corps Officers to receive the honor.  While serving in France, two of these women died from disease, as did so many of our boys. One of these young ladies died on Armistice Day, November 11, 1918.  Two were from Wisconsin, Martina Haynen, Green Bay, and Hildegarde Van Brunt, Milwaukee.

In 1920, the Army Signal Corps Female Telephone Operators Unit finally came home.  Upon “discharge,” the US Army kicked them in the teeth.  They were not discharged from the US Army; they were told they were nothing more than civilian employees and “fired.”  See the Army regulations were almost identical to the Marine Corps who allowed 310 women to enlist and stay in the corps. Even the US Navy had limited women serving in World War One and considered them military veterans after the war. The difference between the Army and the Navy/Marine Corps was one single word.  The Navy and Marine Corps used the world personnel; the Army used the word man.  This one word meant the Army could not discharge the women because they were not eligible to serve.  The fact that they had met the same physical requirement, oath, and training in basic military skills and were issued military uniforms and awarded military service medals meant nothing.

The up side back home though was the men they served with remembered their service.  One of the operators even lead the fist Armistice Day parade in her hometown in Michigan in her military uniform.  The women themselves fought back to get the veteran status and privileges they earned a right to.  This fight took fifty-nine years for the Female Telephone Operators Unit to finally receive the military veteran status they earned.  In 1977, these women would be discharged from the United States Army honorably; well that is the thirty-three that were still alive. The 188 who died before 1977 were never given military veteran status.  Upon discharge in 1977, one operator was overheard telling her daughters, “All I ever wanted was our nation’s flag to cover my coffin when I go.” When she passed a few years later her wish, which is the final benefit for all US military veterans, was granted. This is why we stand during the National Anthem and we respect our flag, because in doing so we respect and remember the sacrifice in war and after the return home of people like the Hello Girls. 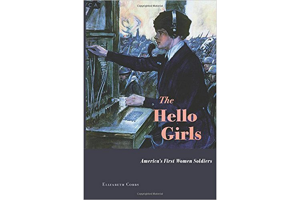 I did not give more names of these amazing women in this article as I hope my readers want to learn more about these women.   You can do so by reading “The Hello Girls” by Elizabeth Cobbs or watch the documentary of the same title by Jim Theies from Racine, WI, when it airs in June on PBS.

Previous Post: The Boots Of The Three Regiments
Next Post: When A Flag Sits Upon the Boots