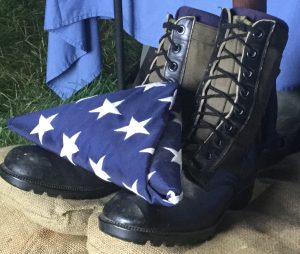 When I work in my office, I look at a poster of a Marine pointing his finger at me asking the question, “If I were accused of being a Marine… Would there be enough evidence to convict me?”  I saw this poster in several locations while I served but I did not give it much thought for most of my time in the service.  After Desert Storm, when I had my third operation to repair me after a training accident, it became a hounding reminder of my value as a person.  After that operation, I almost died from the anesthesia; it took longer in recovery to get me to stay awake than the operation itself.   In those hours I thought a lot of this poster, but the question changed from asking about be accused of being a Marine which I know there was enough evidence, to many other things, a good… friend, person, husband, father, son…and so on. Things I might not be convicted of.  That is why I now keep it as a reminder on may desk as I work.

Over the past several months I have provided articles on how the vast majority of veterans see the national anthem and our nations flag.  The question, if we were accused of being a good nation, would there be enough evidence to convict us is a fair question.  We are by European standards a young nation and yes we have our faults and sins.  In World War Two we lost over 400,000 Americans to bring “freedom” to the world while we practiced segregation and interned large numbers of Japanese-American in camps.  So yes we can find lots of evidence that we are not.   However, that same can be said for every nation and people on earth. The Japanese executed more Chinese civilians in World War Two than the Germans in the Holocaust.  The Soviet Union executed more of its citizens than the total of the Japanese and Germans combined under the leadership of Joseph Stalin.  If we picked a single event and used that event as an albatross for the rest of history, there are no good nations; there are no good people.

To evaluate our worthiness as a good nation we can’t look at a single event like slavery, women’s suffrage, or segregation; we can’t say that because it existed we will always be a slave nation even though slavery is over. If we look far enough in the past every individual in America can be tied to some despicable person; even the American Indians and some African-Americans had slaves.  The question of our worth as a nation is in the struggle to overcome and make our nation a better nation.  The women who marched for the right to vote did so with our nation’s flag.  Free slaves and the sons of freed slaves marched into battle with our nation’s flag to bring freedom to African-Americans still held in the south.

Those who know me can tell you I have always said that democracy is tolerance to all you despise.  But let me be clear, as a historian I know our nation has evolved through civil protest.  There are things that should be changed; however our flag and national anthem are not acceptable forums for those protests.

Our nation is the only nation on earth composed of all the nations, religions, and sexual orientations of all the people of earth. Our military and veterans compose 100 percent of that mosaic of the people of earth.  A flag is the last gift a military service member or veteran is given upon conclusion of their time on earth.  A folded flag will rest upon their boots if they fall on the battlefield.  A flag will cover their coffin when they come home; it well be folded with great care and presented to the family on behalf of the president of the United States at their internment.  A flag will be folded and given to all veterans at their internment for their service.

So, if you want to protest and even if your cause is noble and just and you want to loose the support of every group of people you can, protest during our national anthem or in a manor that desecrates our flag.   I do not see the righteousness of your cause; I see you disrespecting the memory of those I served with, who died while in service, and came home under that flag who gave you the right to protest in the first place.